Share All sharing options for: Valentine's-Themed Listicles Say Our Chefs Are Hot And The Rest of Us Are Pathetic

If there's a holiday coming up, there's sure to be an explosion of relevant listicles, and V-Day may just take the listicle-inspiration cake. They start, of course, with the ever-popular "sexy chef" motif. (Eater, of course, knows nothing about this.) Which restaurant-industry professional is most reducible to their physical components and viability as breeding stock? Which celebrity chef's name will you be scrawling all over your algebra notebook this season? You may not have thought you'd need help figuring that out, but hey, it's time you came to terms with that fact that the internet doesn't care what you want.

Oh, and this year, Pennsylvania also earned the dubious honor of housing the most pathetic bunch of sad-sack singles in the nation. So we've got that going for us.

· First and perhaps ickiest of the round-ups is an Urbanspoon top-ten titled America's Sexiest Single Chefs, which has some things to say about people's weight and looks and how long they'll likely be "on the market." Landing at number six on their list is former Top Chefcontestant Jen Carroll. "Renowned chef Eric Ripert personally selected this beauty to lead his kitchen at 10 Arts Bistro & Lounge," notes Urbanspoon, because it would be a total deal-breaker if a potential romantic partner had never been hand-selected by Eric Ripert for anything. (They do give her a nod for her "angling prowess," which might be OK.) 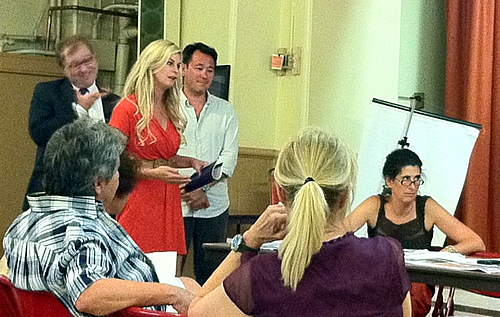 Jen Carroll, in 2012, addresses an NYC community board, which is not cited as one of her sexier skills. [Photo: Eater NY]

The list is topped by former host of Top Chef and current host of The Kitchen, Katie Lee, whose eminent marriageability is evidenced by her "casual, comfortable style in cooking and life." The full list doesn't appear to have been published online (it was circulated via press release), which should be considered a minor victory for the internet. Update: It was a good run, internet, but Urbanspoon has now published the list. It's no longer numbered, but it does conclude with the creepy directive to stalk the chef of your choice "for an opportunity to score."

· USA Today's list of "the hottest up-and-coming chefs to crush on" is thankfully more food-centric, and gives a nod to Philly's favorite adopted misanthrope, Peter Serpico. They cite his James Beard Award and his Cope's corn ravioli as reasons to crush on him, but somehow fail to include the fact that he's a self-decribed "very, very negative person" who mostly likes to spend time with his dog. Clearly, this nonsensical recognition was well deserved.

· Last and best is this offering from Estately, which uses math and cold hard facts to name the 10 States With the Saddest, Loneliest Singles. And yeah, Pennsylvania, we're number one! And we won by (what we think is) a pretty wide margin of 14 points. High fives all around.

How did we rack up all of those points? Apparently by conducting the most Google searches of any state for "blowup doll" and "Snuggie," and the second-most searches for "Life Alert Emergency Response" and "cooking for one," which... yeah, ok, that's all sort of believable.