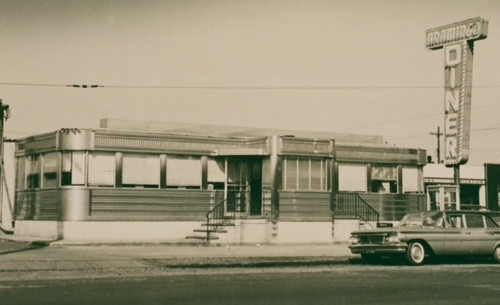 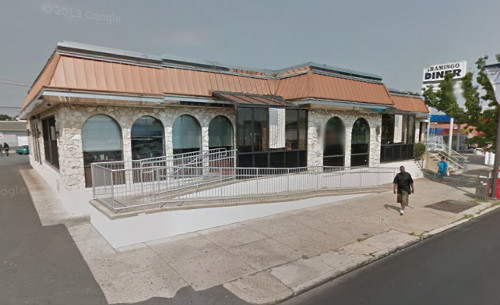 A vintage shot of the diner, which opened in 1957, versus recent years. [Photos: Aramingo Diner/Twitter; Google Maps]

On Sunday, after 57 years of serving up diner staples to the Port Richmond neighborhood, the Aramingo Diner closed its doors for good. Initial rumors, which circulated earlier this month, suggested that the diner would be closing on March 21. If employees were aware of the diner's fate, they didn't let on. On a first call to test the weight of the rumors, the woman who answered the phone said, "As far as I know, we aren't closing. I don't know how that got started." During a visit last week (for a favorite chicken parm platter), a waitress shook her head and denied the rumored closing, simply saying, "No, we aren't." On March 21, the Aramingo posted on Facebook and Twitter that they were not closing, but that they would be moving away from 24-hour operation to close at 9 p.m. each night.

As a lifelong resident of the Port Richmond area, I took solace in the fact that they were trying to make it happen, and as a family-run, locally-owned restaurant it made sense that they would rather close early then close totally. So on Sunday, March 30, when they taped a thank-you letter to the door and locked the place up, it came as a shock despite the rumors.

The owners wrote in their note simply that "it was time to retire," but over the years the once-proud diner had definitely started to slip. It had already converted from a classic diner with dark wood booths with red leather cushions years ago to a more modern look in the mid-'90s. After closing temporarily due to a fire in 2006, they did some more updating — taking out the old tableside jukeboxes, to be replaced with some newfangled Megatouch machines — but you could tell things were continuing to decline: the menus became Xeroxed pink paper shoved into the plastic holders, booths without the Megatouch machines had just plywood in the empty hole, and depending on the time of day, the food could be awesome or borderline inedible. A late-night shooting at the diner in 2010 did not help matters. [Ed. note: Another shooting took place at the Aramingo in 2006.]

Despite the Aramingo's decline, its closure leaves a hole in the heart of a neighborhood that loves to eat, loves to socialize, and loves to support local businesses. While Foobooz hears that the next use for the building will not be a restaurant, I can't help but hold out some hope for someone to buy and revive the diner that will be so missed.