The SALO project, a series of Filipino themed pop-up dinners occurring across 50 states in 50 weeks, made its way to Philadelphia last night, Sunday, April 27. Started earlier this year by self-taught chef Yana Gilbuena, the SALO project is a partnership with food startup Feastly that aims to raise awareness of Filipino cuisine across the US. As an added bonus, the proceeds from the series are being donated to support the relief effort for Typhoon Haiyan, which devastated portions of the Philippines in November of last year. 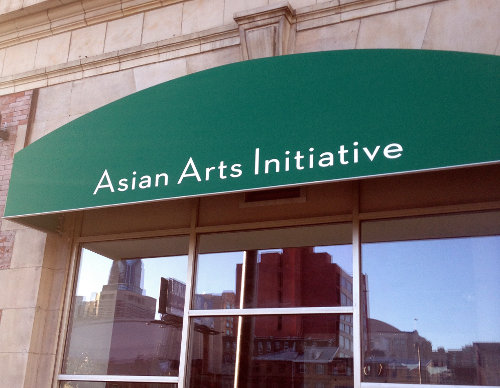 The event was housed in the Asian Arts Initiative, a multidisciplinary arts center located off the Vine Street Expressway in Chinatown North.

In true pop-up fashion, the 30 or so guests of the event were notified of the location at the Asian Arts Initiative only a few hours prior to the start of the meal. Upon arrival, guests were seated at a long communal table covered in banana leaves, on which all food would be served for the night. Completing the authentic feel of the meal, utensils were omitted in favor of a kamayan ("eat with your hands") style of dining. A first for several in attendance, eating this way definitely yielded a more intimate connection with the texture and temperature of the food - in addition to creating a challenging scenario for pouring wine and taking Instagram photos.

For each dinner, chef Yana chooses to build her menu around regionally available ingredients and selected pork to represent Philadelphia that night; other events have included a seafood focused meal in Baltimore and an upcoming meal featuring various roast cuts of meat in New Jersey.

At the onset of the meal, chef Yana and her helpers placed a large portion of garlic fried rice stretching the length of the 30 foot table. The rice, filled with charred bits of garlic, would serve as an accompaniment to all of the other courses of the meal and was quite tasty. There was also a sweet and spicy dipping sauce available throughout the meal, made from Thai chiles and vinegar. 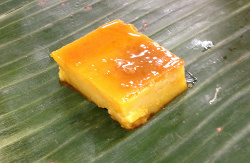 For someone with little familiarity with Filipino cuisine leading up to the event, the meal demanded a dive-right-in approach: the beginning of the main courses included a few preparations of offal, featuring a Filipino take on chitterlings and pig jowls with tripe. It was a challenging start to the meal for anyone not named Andrew Zimmern. As the meal progressed, however, we saw a few more courses that appealed to the less adventurous eater, including vermicelli noodles with chicken and rat ear mushrooms, a sweet and sour stewed pork, and a delicious Filipino version of flan for dessert (pictured, right).

But with an event like this, food is only one part of the overall experience that makes a pop-up such a departure from a traditional dinner out. The crowd included some guests who drove in from northern New Jersey and Baltimore, and over the course of the three hour meal, seatmates became friends as stories (and wine) were shared.

L: Using one's phone while eating stew with one's hands is a damn art. (That's Gilbuena in the background). R: The aftermath was kinda major.

The SALO project has several more events occurring across the country in the coming year, with next week's event in Roselle, New Jersey offering the closest opportunity for Philly area. More information can be found on the Feastly website or by following SALO on Facebook.