Share All sharing options for: Behold the Scrapple Waffle at NYC's Ivan Ramen

Ivan Ramen, one of the most hotly anticipated recent NYC openings, has a scrapple waffle on the menu—and Eater critic Robert Sietsema calls it "one of the city's best dishes of the year" on an early visit. (Owner Ivan Orkin has developed a cult following over the years through his Tokyo ramen shops and tiny Ivan Ramen Slurp Shop in NYC's Gotham West Market.) 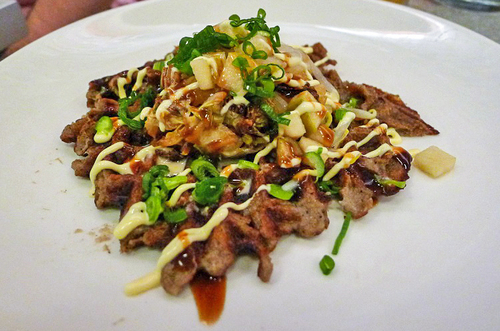 Dubbed the "Lancaster Okonomiyaki," the waffle itself is made of scrapple, which "cooks up tender and tasty in the waffle iron." According to the menu, the toppings include charred cabbage, pickled apple, and maple Kewpie mayo.

Cheu Noodle Bar, of course, also saw fit to include scrapple on their opening menu. (Theirs was housemade.) But seeing the variety meat take such a star turn in New York is a whole other thing. While we're probably safe for a while from Subway slinging "Philly-style" scrapple subs coast-to-coast, this could be one step toward a more widespread embrace of Josh Ozersky's recent assertion that scrapple "one of the crucial American meats".