Highlights From the 2014 Great Chefs Event

Share All sharing options for: Highlights From the 2014 Great Chefs Event

After much anticipation, the Vetri Foundation's 2014 Great Chefs Event was held last night, June 10, at Urban Outfitters HQ at the Navy Yard.

The event, now in its ninth year, was established as a fundraiser to benefit Alex's Lemonade Stand, the well-known charity raising money to fight childhood cancer, and the Vetri Foundation for Children, an organization established to help educate children in the Philadelphia school systems about healthy eating habits. Each year, Vetri selects a who's who of personal friends and respected chefs to prepare dishes for the attendees, sponsors, and fellow chefs — this year, that totaled more than 1,200 guests. With no underlying theme to the evening, the chefs were allowed creative freedom to prepare what they wanted. That meant a very diverse menu, with small plates ranging from barbacoa tacos to foie gras cotton candy. 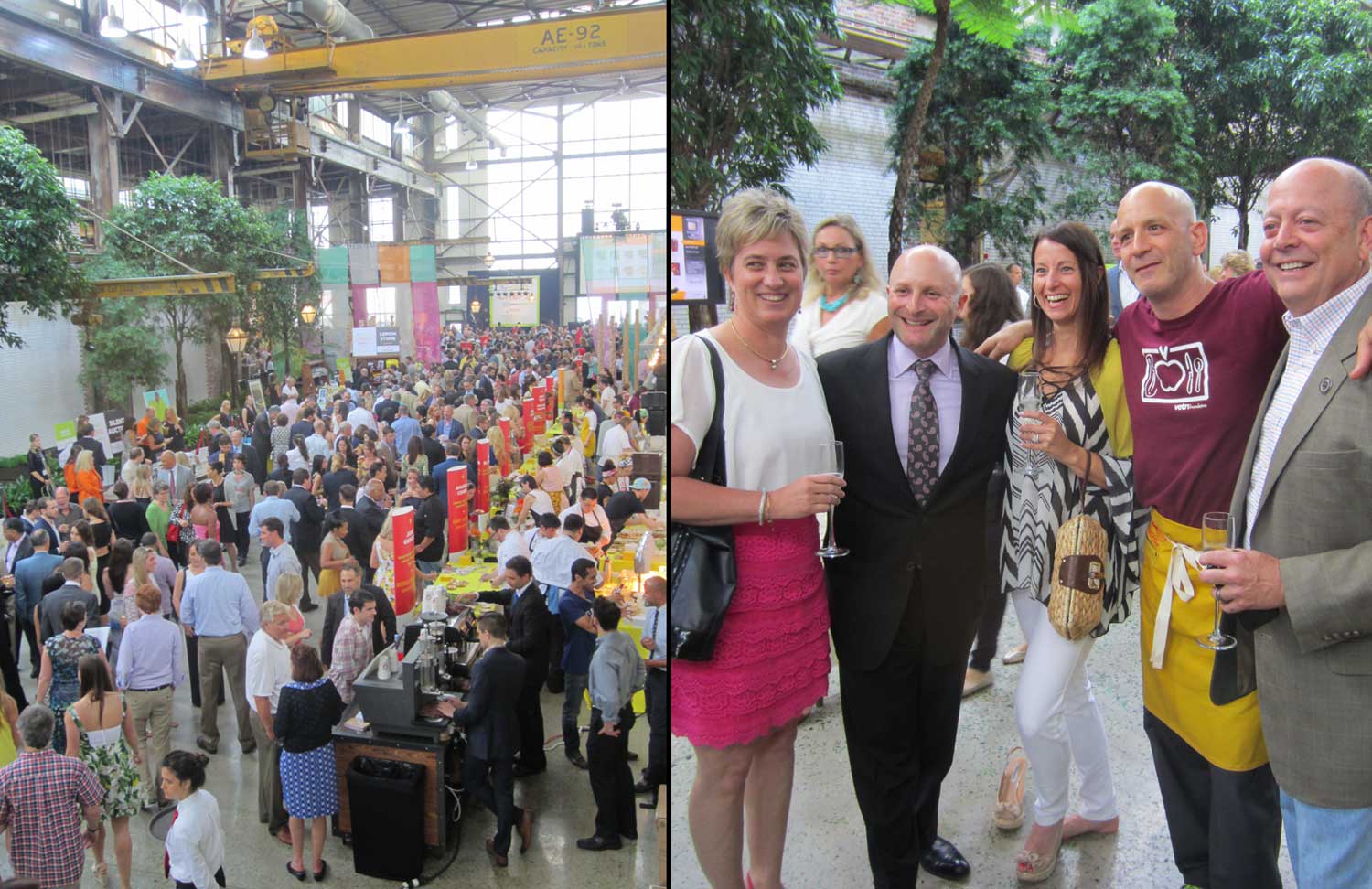 The crowd packed Urban Outfitters HQ, but hosts Marc Vetri and Jeff Benjamin found plenty of space and time to pose with attendees.

The only hiccup for the evening, if you could call it one, was the heavy downpour that hit the area for portions of the day. With several chefs planning to prepare their dishes outside, this could have caused a problem leading to some last-minute menu changes. Aside from some humid conditions inside Urban HQ, the weather didn't seem to have a huge impact. 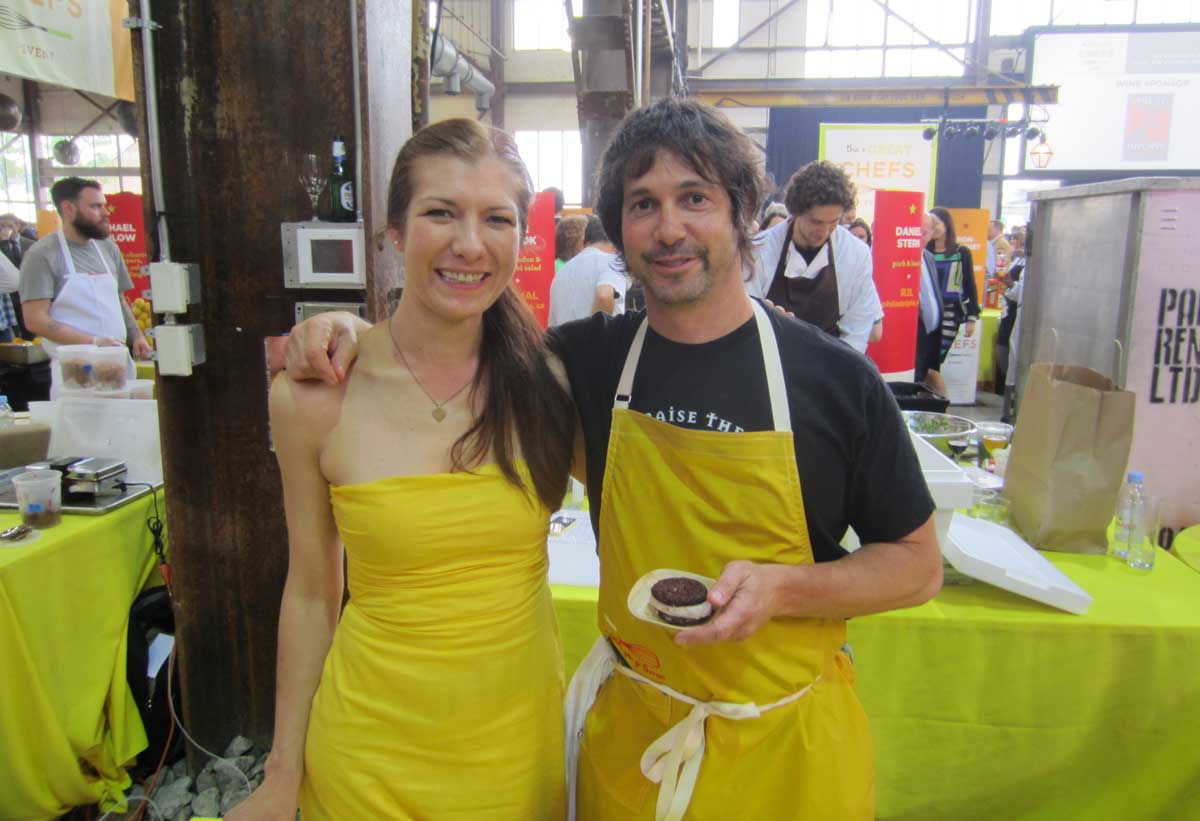 Despite the wrath of Mother Nature, Craft restaurant's Tom Colicchio and Lauren Hirschberg were still able to spit roast two whole lambs from Border Springs Farm in the parking lot, albeit with the assistance of a large tent to shelter from the rain. The lamb tacos, cooked for six hours, were topped with pickled onions and cojito cheese and were easily a crowd favorite. (Ambitious amateur chefs looking to recreate the dish can purchase their lamb directly from Border Springs at Reading Terminal Market.) 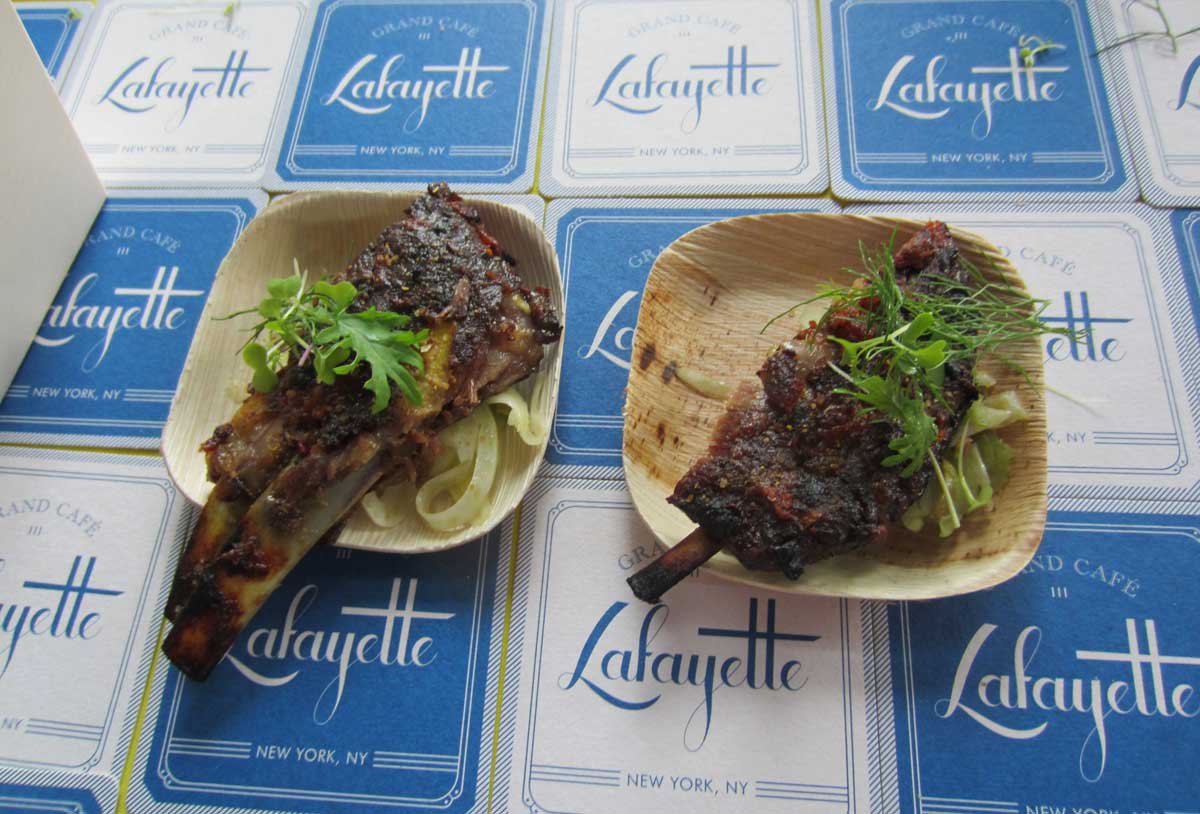 The Lafayette's lamb ribs were awesome — and the branding was pretty deft, too.

Andrew Carmellini and Damon Wise of Lafayette (NYC) also chose to focus on lamb for their dish. Their lamb ribs, baked in the oven for two hours before being finished on the grill, were basted with a savory tomato, Dijon, and lemon glaze, and served with a refreshing, tangy green olive and fennel salad. Other meat-centered dishes for the evening included Jonathan Sawyer's Carne Salata alla Trentina, which was finished with a melted beef fat from a handmade candle, and Michael Symon's spicy, crispy pig ears with pickled tomatillos and a homemade ranch dust. 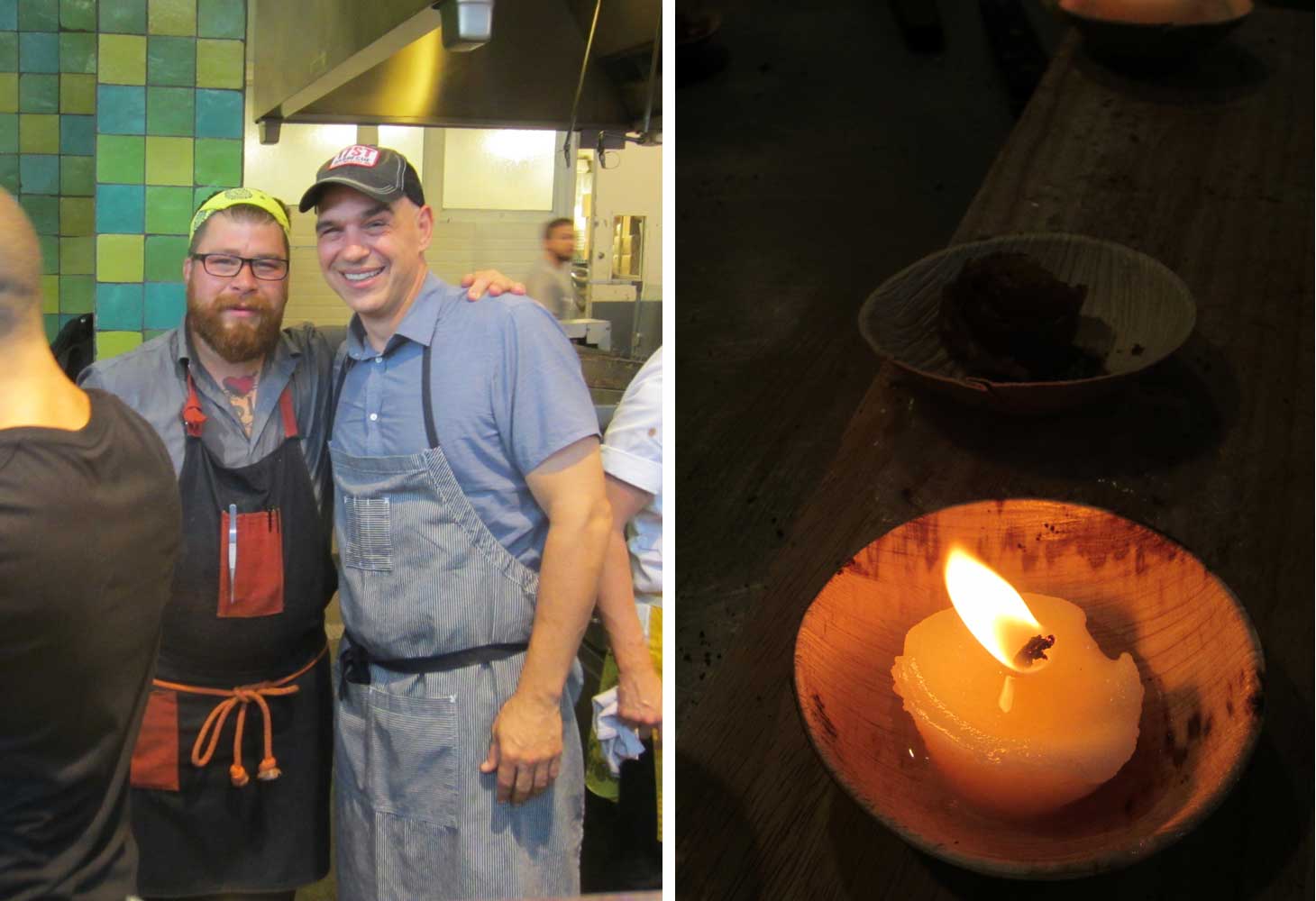 At left: Cleveland chefs Jonathon Sawyer (left) and Michael Symon pose for the camera; at right: beef fat candles waiting to be tipped onto Sawyer's dish. 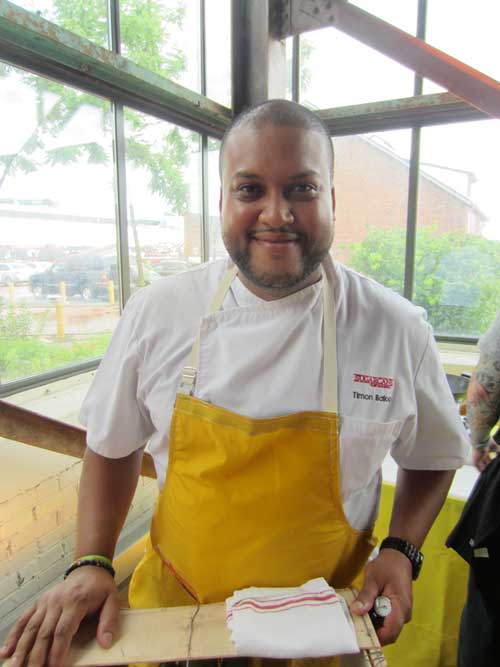 As many of the chef's were close personal friends with Vetri, several chose to add an Italian influence to their dishes. Aside from Vetri's previously mentioned mortadella, Great Chefs also featured prosciutto from DiBruno Brothers (as expected), salumi from Cesare Casella (New York), and ham roasted in hay with Bergamo mountain cheese and polenta from Marco Rossi, of Osteria Le Cantine D (Italy). Timon Balloo (shown, right), of Miami's SUGARCANE Raw Bar Grill, making his first Great Chefs appearance, made a short ribs and gnocchi dish with corn and spring peas. Balloo was aided at the event by his sous-chef/wife, who (it's worth mentioning) spent several hours hand splitting the more than 5,000 pea shoots needed for the dish. 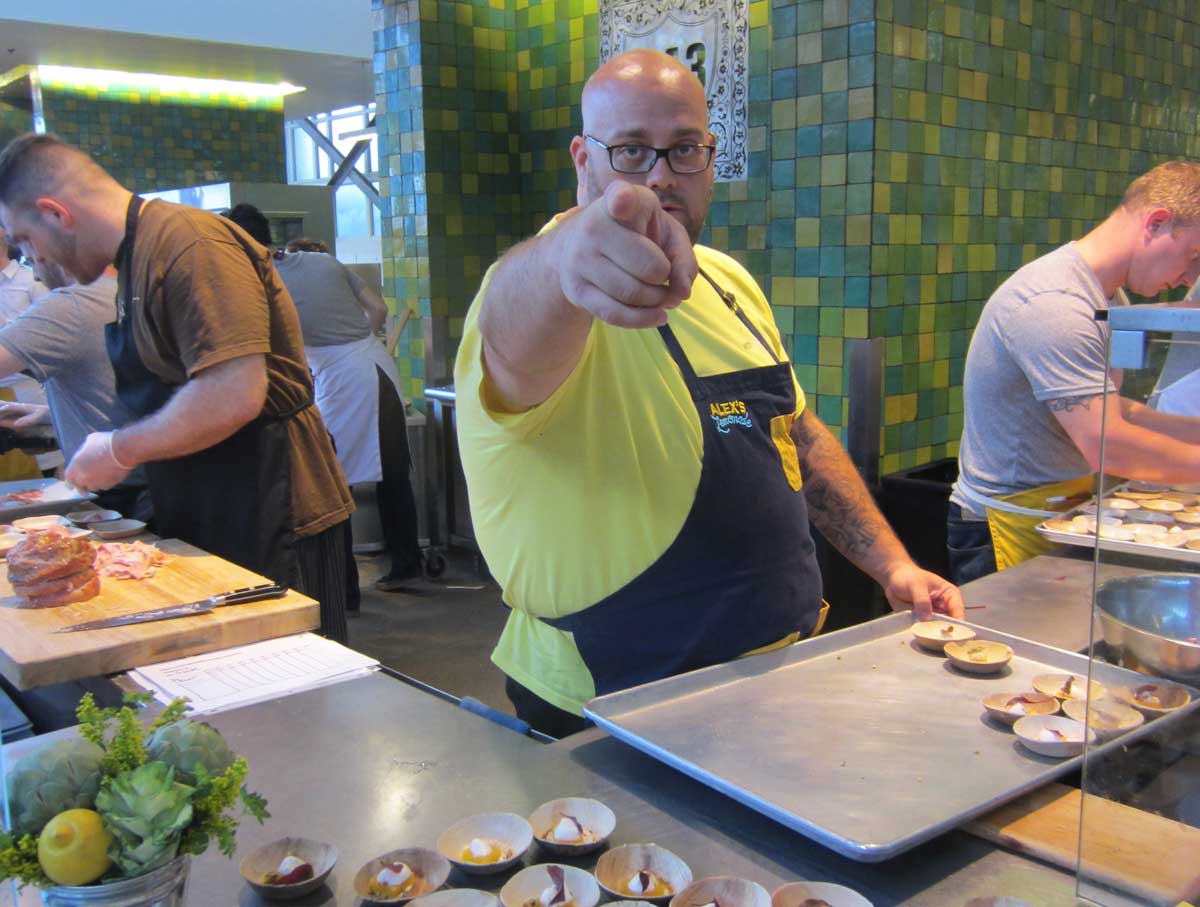 Rocco Whalen wants YOU to try his beets.

That's not to say that every chef chose an Italian or meat-focused dish. Great Chef veteran Rocco Whalen, in his ninth year of attendance, knew that many chefs would offer richer dishes. As balance to the savory offerings, Whalen's dish of beets with whipped honey and pepper-candied pistachios was surprisingly refreshing. As with other chefs, Whalen estimated that he would be serving over 1,000 dishes that evening. 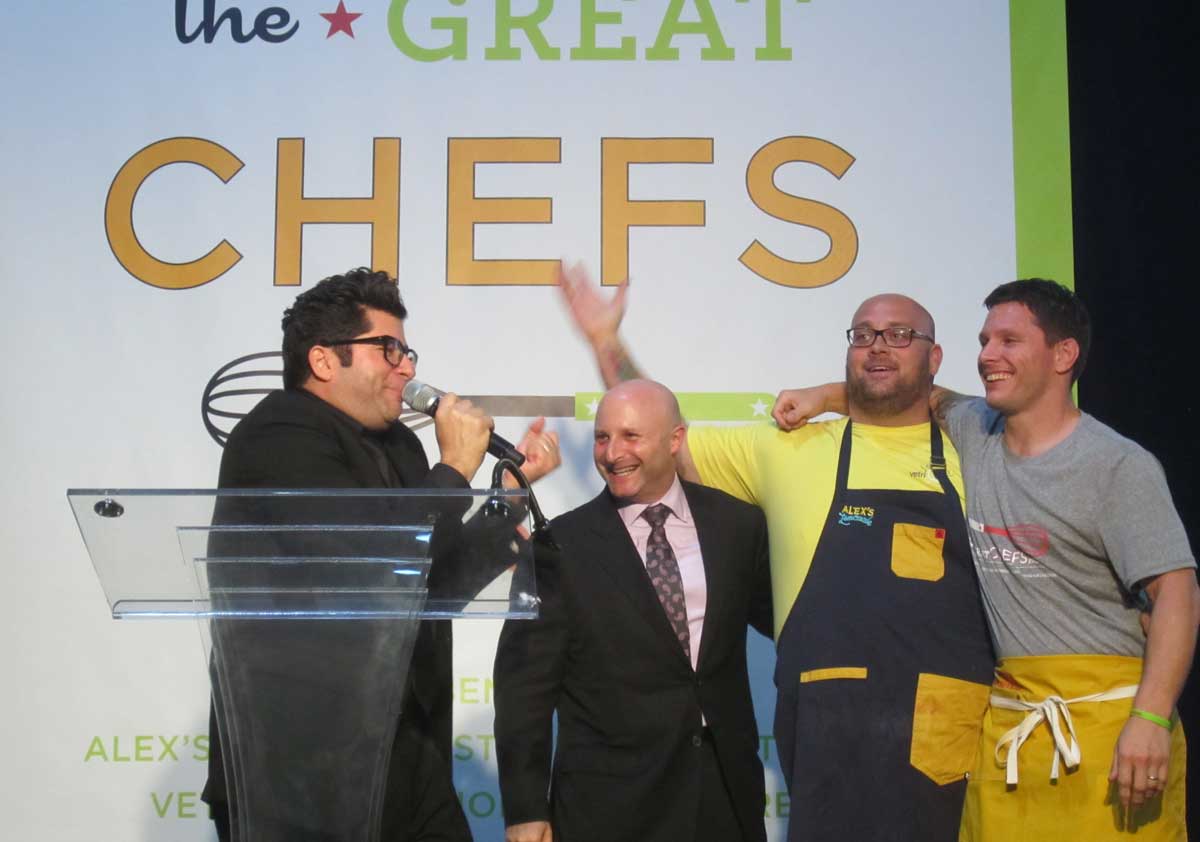 Auctioneer Billy Harris very animatedly drives up the price for a trip to Italy with Jeff Benjamin, Jeff Michaud, and Rocco Whalen.

While food is certainly a focus of Great Chefs, the ultimate goal of the event is to raise money for two great causes. Beyond the cost of attendance (with GA for the event running at $375), Great Chefs also featured a silent and live auction. While the silent auction was held online, the live auction was a nice break in the proceedings for the evening. Following some inspiring speeches from Liz and Jay Scott (parents of Alex and founders of Alex's lemonade stand), auctioneer Billy Harris provided an entertaining, fast paced run through the five-featured packages. Big-ticket items included a private dining experience for six at Jose Garces' Volver, which sold twice for $10,000, and a food tour of Italy with Jeff Benjamin, Jeff Michaud, and Rocco Whalen went to one lucky couple for a cool $24,000. In total, the live auction raised $80,000; organizers expect the final numbers for the entire event to exceed their goal of $1 million. 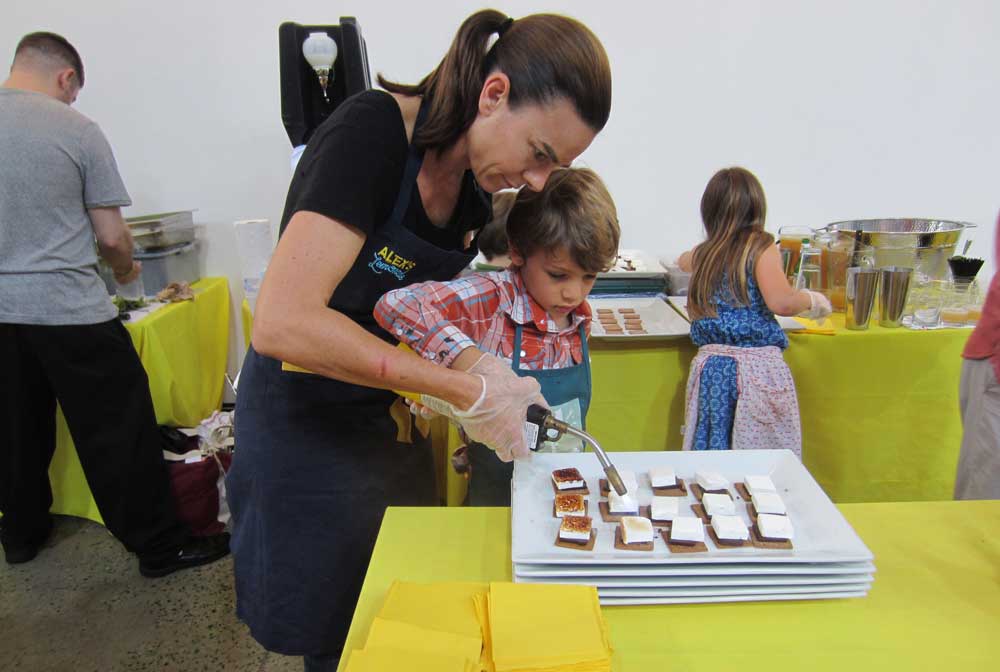 Following the live auction, guests began to gravitate towards some of the sweeter offerings. LA's Suzanne Goin & David Lentz were serving S'more's with house-made marshmallow and bitter sweet chocolate (one of several dishes that Eater came back to for seconds... and thirds). To achieve the desired S'more melt, Goin used a blowtorch with the help of some younger sous-chefs.

Chef Katsuya Fukushima (far right) of D.C.'s Daikaya served a take on a gin and tonic (lemon injected with gin plus a candy cane straw) and foie gras cotton candy. 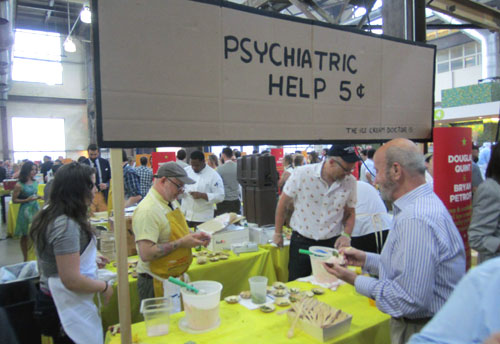 Big Gay Ice Cream, with one of the best tables of the night.

New York's Big Gay Ice Cream also had a presence at the event, making perhaps the biggest headline of the evening with their announcement of an upcoming brick and mortar shop at South and Broad this summer.
— Dan McKay
· All Great Chefs Coverage [-EPHI-]