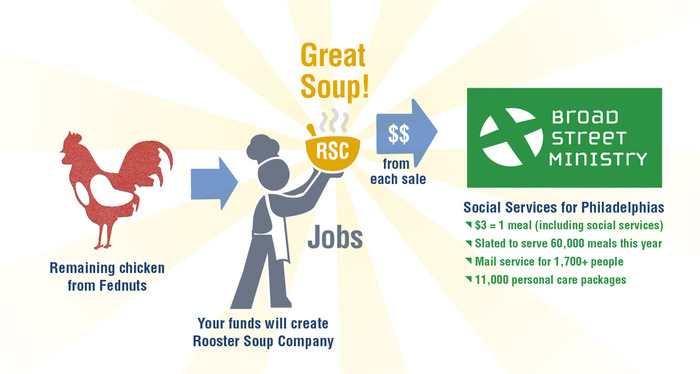 The Federal Donuts team has launched a Kickstarter for a new venture in "radical hospitality" they're calling Rooster Soup Co., which would form a unique partnership between the CookNSolo restaurant empire and Broad Street Ministry. The latter's Broad Street Hospitality Collaborative hosts four community meals each week that go beyond offering just food: they provide counseling, medical and personal care services, legal aid, and more.

The FedNuts team is seeking $150,000 by July 26 via the crowdfunding site to open a chicken soup restaurant. According to their Kickstarter appeal,"Federal Donuts currently discards enough chicken bones to produce about 2,000 bowls of chicken soup each week." The new business would turn that waste into profit, 100% of which will fund the social-services initiatives of BSM. The business plan projects annual net profits of $50,000 early on — an amount they expect to eventually double.

The backer rewards for this Kickstarter include the obvious (free chicken and donuts at FedNuts, free soup once the new place opens) and the even-more-philanthropic (a volunteer day with BSM followed by a FedNuts lunch). For those with deep pockets, though, things start to get truly sublime: skydive with Mike Solo for $5,000. Have him cook dinner in your home for $10,000+. Or, for $2,500, perhaps the best of all:

Here's the official Kickstarter video for the project: