Independence Beer Garden, Michael Schulson's (Sampan, Izakaya in A.C.) massive new beer garden just across from Independence Mall, will open on Thursday, July 10. Eater Philly checked in this week and, along with a few updates, got a hold of an exclusive look at the opening tap list and cocktail menu.

IBG has two bars, each with 20 taps, but it looks like each bar will be carrying the same draft selection, at least to start. In addition to 20 drafts, the opening menu offers 17 beers in bottles and 15 cans. Wine drinkers are limited to a small handful of house varieties and one signature, sparkling can (Coppola Sofia Blanc de Blancs). The cocktail list includes lots of beer-based options (like the requisite takes on a shandy and radler), as well as a bramble that incorporates long hots. Most of the beer and cocktail selections are available by the pitcher.

It looks like there's an awful lot left to be done in a week, and there is. The steel-girder pergolas you see above will be draped in plants, sculptural elements, and wooden screens to block the view of the office building alongside the garden. But the kitchen, bars, taps, and other major infrastructure was in place, and Schulson pointed out that the landscaping is the quick part. (IBG's partner, Groundswell, also worked on Spruce Street Harbor Park — the whole of which somehow popped up in just a few weeks.) 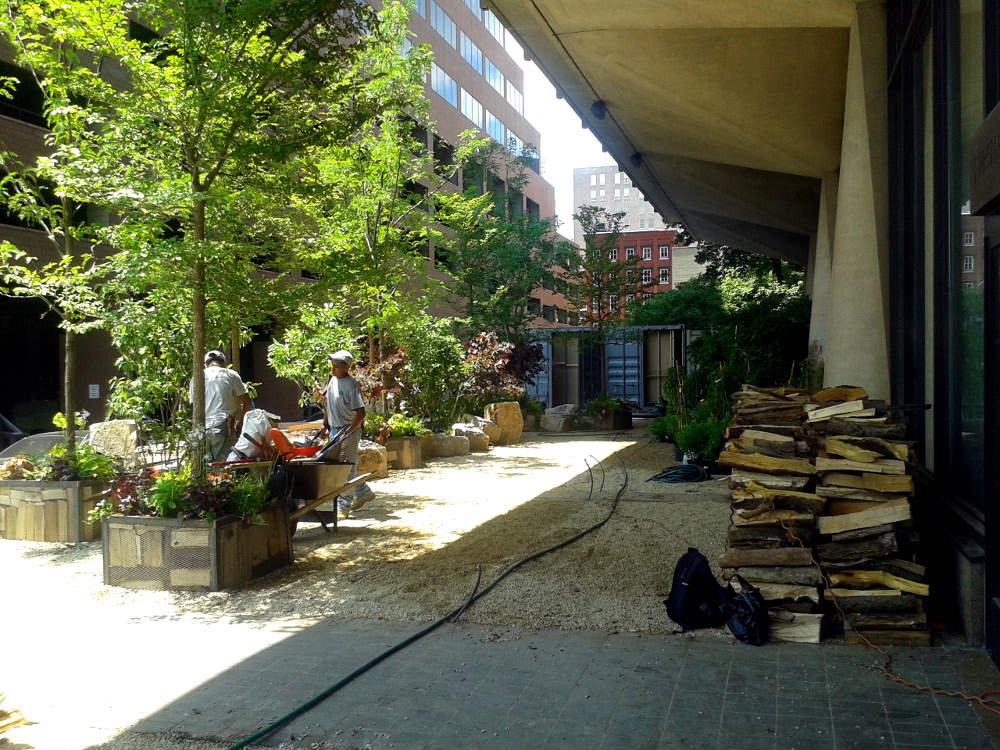 Along the south side, a little more work was done, and you can see the planters they're using. A couple of bocce courts will be set in along this stretch. [Photo: Eater Philly]

The kitchen and storage facilities — surprisingly large for a beer garden, though this place is permanent, incorporates more than 25,000 square feet, and could end up seating more than 400 once all is said and done, according to Schulson, plus the food menu will be fairly extensive — are built into shipping containers. Same goes for the restrooms and one enclosed seating area for those looking to escape the elements. Schulson promises that full table service will be available to all areas of the garden, though you can also order directly from a kitchen window or either bar if you so choose.

Games and fire pits (a DIY s'mores set-up is a definite on the menu) will provide entertainment throughout. But without further ado, here's what you'll be drinking while you carouse (NB: prices are listed by the glass/pitcher where applicable):