Share All sharing options for: Kevin Sbraga Opening a Restaurant in Florida 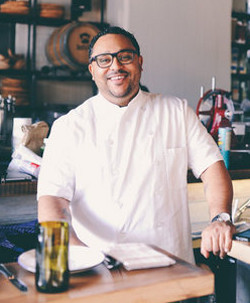 Kevin Sbraga, Top Chef winner and owner of Sbraga, The Fat Ham, and upcoming Juniper Commons, is looking farther afield for his next project — all the way to Jacksonville, Florida. The news was reported by the Florida Times-Union and caught by local photographer/columnist HughE Dillon.

Sbraga's Florida spot doesn't have a name or concept yet, but will be one of three restaurants located in a new mixed-use development called 220 Riverside. He hopes to open in early 2015.

Sbraga told the Times-Union (who also cited Sbraga's 2013 Eater Award), "We don't want to transplant what we're doing in Philadelphia down here. It will be unique to Jacksonville."
[Photo: Eater Philly/Alyssa Maloof]