Jake's Sandwich Board Closing for a Makeover

Share All sharing options for: Jake's Sandwich Board Closing for a Makeover

Heads up, Jake's Sandwich Board fans: You'll need to make alternative lunch plans next week. You can get your fix this weekend, but they'll be shutting down temporarily for a reno starting this Monday, August 4.

The intent to renovate was announced back in the spring (along with the news of a second U City shop, which still has coming-soon status), but the time frame wasn't set back then. Jake's plans to reopen on Tuesday, August 12 — and to welcome you back, they plan to offer $3 sandwiches and free Sly Fox beer that day.

The reno is being done by local firm Eimer Design (who also handled Sbraga's spots and Spike Mendelsohn's Good Stuff Eatery). Here's a design board for the 12th Street location:

And here's the rendering they released of their plans for the U City location, which was said to reflect the look they'd be aiming for in Center City: 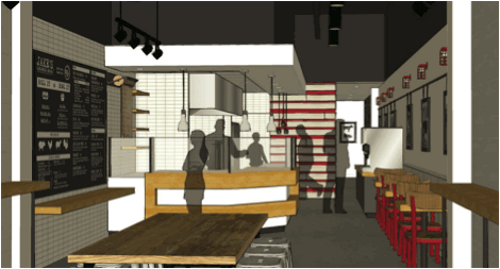