Share All sharing options for: Offensive Map is Offensive; A Hot-Pink Pop-Up

Welcome to Curbed Cuts, a selection of the top real estate and development stories from our sister site, Curbed Philly. 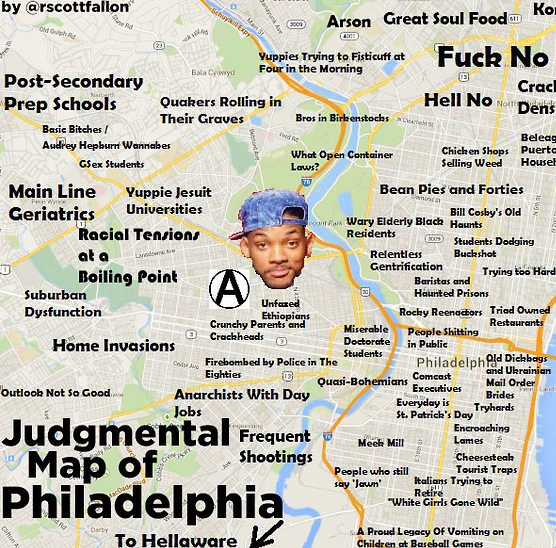 EVERYWHERE — Are you ready to be offended? Judgmental Maps finally took a shot at Philadelphia. With places simply labeled "Hell no" and "Trying Too Hard," we want to know: Where do you reside on the most stereotypical map of the City of Brotherly Love? Check it out here.

PHILADELPHIA — We've rounded up the five most expensive houses on the market in Philadelphia right now. While most are in Center City, you're not going to want to miss the Chestnut Hill estate that features a babbling brook. To the list!

SOUTH BROAD — The SLS International Hotel & Residences recently hung some permits on the property that includes the two buildings on the corned of Broad and Spruce Street as well as the vacant lot that used to house the PHS Pop-Up Garden in 2013. Here are more details.

NOLIBS — A project called Cambridge Lofts has hit the skids as the Northern Liberties Neighborhood Association voted the project down after plans didn't include parking. 28 lofts were initially proposed and were set to be marketed to people without cars. What do you think?

FISHTOWN — Shepard Fairey has his Lotus Diamond mural dedicated today in near Frankford Hall. Check out some great shots from Instagram from Streets Dept. and Fairey himself.

FRANKFORD — a hot-pink pop-up event space called Frankford Pause will debut in Spring of 2015 near the Margaret-Othrodox El stop. You have to see the designs to believe them!
· Curbed Philly [philly.curbed]