At McGillin's, Stewardship of Philly's Oldest Bar Is a Family Affair

Welcome to a special Classics Week edition of Lifers, in which Eater interviews the men and women who have worked in the restaurant and bar industry for the better part of their lives.

Share All sharing options for: At McGillin's, Stewardship of Philly's Oldest Bar Is a Family Affair 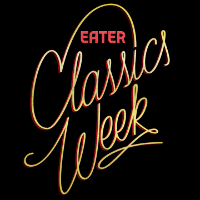 If you've lived in Philly long enough, odds are pretty high that you've stumbled down Drury Lane to grab a drink at the city's oldest operating bar, McGillin's Olde Ale House. Originally founded in 1860, McGillin's has a history that rivals some of the city's best-known landmarks — did you know that the original Ma McGillin operated the bar into her 90s?

As part of Classics Week, we sat down with Chris Mullins (current co-owner along with his wife, Mary Ellen; his son Chris is next in line) to talk about his 57 years in the industry, how the neighborhood has changed around 13th Street, and the secret to a successful business partnership with your wife.

Eater Philly: How did you first become involved with McGillin's?
Chris Mullins, owner: We purchased it.  My wife's family owned the business, but she  was one of eight children, so they couldn't outright give it to her. On the other side, her father's partner had two children, so there were ten potential people to take it over. Prior to this, we had been in the restaurant industry and had achieved a modest success. We had two places named Morley's Pub. The first was in Havertown, which we sold to our partner after a year. The second was in Norristown, directly across from the courthouse. The plan was to have an Irish pub, but you needed to have a really good food product to get people to come to the center of town.

What was the area like in 1993?
Let me tell you, it was really scary. When we came here there was nothing in this area except for topless bars, adult porn shops, and all kinds of crazy, sleazy stuff on 13th Street. We were fortunate that there were a few concurrent events when we first bought the place: one was that the convention center was nearing completion, the second was the beginning of Ed Rendell's term as mayor (the first successful mayor we had in a while), and the third was the establishment of the Center City District, which was set up to make the city cleaner and safer.

With all of that, how was your first year owning and operating McGillin's?
I basically had enough capital that we could stay open and operating for 90 days. If we ended up doing the same level of business [the previous owners] had been doing, we probably would have been out of business after the first month. We ended up coming in and business picked up almost immediately

Do you think that it was outside factors that helped McGillin's turn around or was it any operational changes you brought in?
Well I say this very modestly, but the proof is in the pudding. We've done it before [in Norristown], but there was absentee ownership [the previous owners were old, one of the brothers was very sick] and the place needed more hands-on management and that was the critical part.

Over the years, what has changed at McGillin's?
First of all, we wanted to stay true to what we are, which is McGillin's Olde Ale House. My wife and I wanted the place to be about beer and that was another current that was changing at the time: The city was becoming more about beer. I didn't want to only have five beers on tap, so we had ten beers immediately. Now we're up to around 30 beers [Ed. note: 32, to be exact] and we were the first place to embrace local craft beers in Philadelphia. Prior to that, there was Molson from Canada, Heineken from Holland, and Foster's from Australia. I personally thought we could do better than that. While we might not focus on local food products, our beers are local and right from the get-go we have supported that movement.

Do you also do a lot of food business or do you consider yourselves more of a drinking establishment?
We consider ourselves a good, fun bar, with a fun affordable product. Wings are one of our top five or six items. It varies, but our most popular items are our RB McGillin's sandwich, which we roast ourselves and serve with homemade au jus. Cheesesteaks and burgers are also big. We're into comfort food and retro, so our Mile High meatloaf sells really well. We've taken over a few dishes from the Norristown restaurant including our French onion soup, our marinara sauce, crab cakes, and chili. And it can't be an Irish pub without shepherd's pie.

How would you describe the average person that comes to McGillin's?
Well if I'm looking at demographics, you might think that you are too old for McGillin's. Maybe earlier in the week it gets a little younger, but on the weekends, you'll see people in their 20s and 30s. But we do have older people as well; there will be business people stopping in after work. That's what makes us a fairly typical Irish pub.

With all of the history at McGillin's, how familiar were you with it before and what have you tried to maintain?
Well, first of all, I worked here as a bartender from 1976 to 1980.

Is that where you met your wife?
Actually, I met my wife on Cape Cod. I was a chef and she was a waitress there.

So you've been in the restaurant industry you whole life?
My father was a chef, my brother was chef. My first job in a kitchen was when I was 10 years old. I dished out 500 dishes of peas at an Irish wedding at 10 years old. I've been in it all my life.

After all this time, what makes you want to stay working [in the industry]?
I love being in the bar business, the food business, because it's a challenge but there is this aura of excitement constantly. I've been working for 57 years and I still look forward to coming to work every day.

Are you still active behind the bar?
Every once in a while. I'm a little slow behind the bar, but when you get busy, it's all hands on deck. That's a little bit funny about here, too. You can be here on a Saturday, people are here watching the Villanova vs. Syracuse game, and all of the sudden a wedding of a hundred people shows up. I still work the line; if we're really busy, I'll jump on the line and help get food out.

Outside of McGillin's, do you have any favorite places in the city?
I really like Sansom Street Oyster House and am anxious to try the [newly reopened] Bookbinder's.

So how is it working with your wife and now your son?
My wife and I have been partners in three businesses, and there is constantly friction in a good way. You're always bouncing ideas off each other, and the secret of our success is that we stay out of each other's way. [My wife] is much more in tune and she has an excellent food palate, so she spends more of her time in the kitchen. I'm more of the business and operational side. Having [my son] Chris has been incredible. We hit a point where we weren't growing the business, and Chris has been instrumental in helping us - he's good with social media, more in tune with our age group.

Are there plans to eventually retire?
Chris is actually in the process of buying us out, but I don't have any intention of retiring any time soon.

Being in Philly as long as you have, what made you want to own a business here?
I wanted to stay because I've lived here my whole life and my family's here. I'm a sports fan, I love the sports teams and the city.